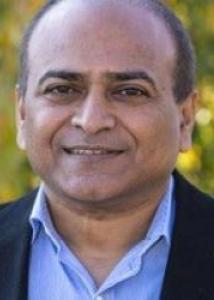 Dr. Vasant Honavar received his Ph.D. in Computer Science and Cognitive Science in 1990 from the University of Wisconsin Madison, specializing in Artificial Intelligence. In September 2013, Honavar joined the faculty of Pennsylvania State University where he currently serves as a Professor and Edward Frymoyer Chair of Information Science and Technology, Professor of Computer Science, Bioinformatics and Genomics, and of Neuroscience, Associate Director of the Institute for Cyberscience, and Director of the Center for Big Data Analytics and Discovery Informatics. He is also on the faculty of the Huck Institute of the Life Sciences, the Institute for Cyberscience. From 1990 to 2013, Honavar served on the faculty of Computer Science and of Bioinformatics and Computational Biology at Iowa State University (ISU). At ISU, he directed the Artificial Intelligence Research Laboratory (which he founded in 1990) and the Center for Computational Intelligence, Learning & Discovery (which he founded in 2005) and served as the associate chair (2001-2003) and chair (2003-2005) of the Bioinformatics and Computational Biology Graduate Program, which he helped establish in 1999. During 2010-2013, Honavar served as a program director in the Information and Intelligent Systems Division of the National Science Foundation (NSF) while maintaining his research program at ISU. He led the Big Data Science and Engineering Program, established the NSF-OFR collaboration in Computational and Information Processing Approaches to and Infrastructure in support of, Financial Research and Analysis and Management, contributed to Smart and Connected Health, Information Integration and Informatics, Expeditions in Computing, Science of Learning Centers, Integrative Graduate Education and Research Training, Computing Research Infrastructure Programs. Honavar's current research and teaching interests include Artificial Intelligence, Machine Learning, Bioinformatics, Big Data Analytics, Computational Molecular Biology, Data Mining, Discovery Informatics, Information Integration, Knowledge Representation and Inference, Semantic Technologies, Social Informatics, Security Informatics, and Health Informatics. Honavar has led research projects funded by NSF, NIH, and USDA that have resulted in foundational research contributions (documented in over 250 peer-reviewed publications) in Scalable approaches to building predictive models from large, distributed, semantically disparate data (big data); Constructing predictive models from sequence, image, text, multi-relational, graph-structured data; Eliciting causal information from multiple sources of observational and experimental data; Selective sharing of knowledge across disparate knowledge bases; Representing and reasoning about preferences; Composing complex services from components; and Applications in bioinformatics and computational biology (especially analysis and prediction of protein-protein, protein-DNA, and protein-RNA interactions and interfaces, B-cell and T-cell epitopes, post-translational modifications), Social network Informatics, Health Informatics, Energy Informatics, Security Informatics, and related areas. Honavar has served as a principal or co-principal investigator on grants totaling approximately $45 million during 1990-2017 from the National Science Foundation, the National Institutes of Health, the US Department of Agriculture, and the US Department of Defense. He has extensive curriculum development and teaching experience in Artificial Intelligence, Machine Learning, and Bioinformatics. He also has substantial industrial consulting experience in Data Mining, Bioinformatics, and related topics. Honavar is a member of the Computing Research Association's Computing Community Consortium Council where he chairs the Convergence of Data and Computing task force. Honavar has served on the editorial boards of several journals including IEEE/ACM Transactions on Computational Biology and Bioinformatics, Big Data Journal, Cognitive Systems Research, Machine Learning, the International Journal of Semantic Web and Information Systems. He was general co-chair of the IEEE International Conference on Big Data in 2014. Honavar has received many awards and honors during his career including the NSF Director’s Award for Superior Accomplishment in 2013 for his leadership of the NSF Big Data Program, the NSF Director’s Award for Collaborative Integration in 2011, the Board of Regents Award for Faculty Excellence in 2007, the College of Liberal Arts and Sciences Award for Career Excellence in Research 2008, and the Margaret Ellen White Graduate Faculty Award in 2011 (all from Iowa State University), and the Pennsylvania State University College of Information Sciences and Technology Senior Faculty Research Excellence Award in 2016. However, the 31 PhD students, 25 MS Students and several undergraduate researchers that he has trained are among his proudest accomplishments.